I just returned from the Ohio SHRM State conference and was reflecting on the trip.  I had a lot of time to relect - 7 hours in my S10 to be exact.  The conference was in Steve Browne's words AMAZING, and I agree.    I was fortuntate to hear some talented people present on some pertinent topics (that is another post in and of itself). I also met a lot of nice folks from the Buckeye state.  And I also got renew some old friendships.

The more time you spend with people the better you get to know them.  The whole program was themed with Rock | HR Rocks | and Rock Stars.  Well I hung out with a true rock star, and an HR guy. My buddy Brad Galin is a rock star. 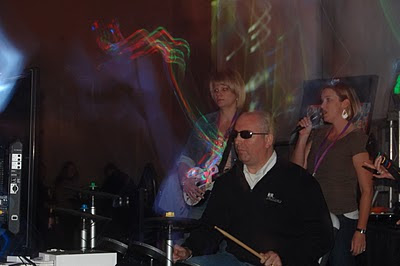 That's Brad with the shades on.  HR guy by day - rock star conference attendee at night. I have met Brad before but I got a chance to spend time with him at OHSHM as a fellow out-of-stater.  Brad works by day in the not-for-profit sector.  He is also active with the Indana State Council of SHRM.

It is alway enjoyeable to spend time with someone who is like minded, and Brad and I share a number of similiar interest.

I plan to stay in touch with my neighbor to the east over in the Hoosier state, and look forward to catching up with him soon.  I plan  on attending thier State Conference in Indiana next year. Lastly, I had to put up the post so that I could make him the talk of the office with his rock star pictures.  There are a few more here.