The fact that my first year as director my "goals" blog post was published 1/7/11 and I am just sitting down to write my second year update on 1/26/12 (finalized on 1/31/12) should tell you something.  Either I am extremely disorganized or we have been very busy here at the Illinois State Council of SHRM (aka @ILSHRM).  Personally, I prefer the latter even though at times I do feel the first reason can and has been true at times.

It has been an awesome year and I am so humbled by the wealth of talent on our board of directors as well as the enthusiasm and hard work they have put forth to make tremendous headway towards our goals.  And by golly they even met and exceeded some of them.  The following is a copy of the 1/7/11 goals list with noted updates (in bold) as well as additions for 2012 which take me through the end of my tenure as Director turning over the reins to Cathy Plouzek, PHR for 2013 & 2014.
…
I’d like to share a few goals that I would like our state council to achieve during my two year tenure as Director. I have to admit these goals are prior to my looking at the SHAPE plan (again this years since it just came out). So I am sure it will grow…Our board did meet earlier this month and I am still in the process of meeting with all of our core board so like this list last year, it may change as the year goes on:

1.       WORKFORCE READINESS (SHRM CLA) 100% Chapters signing the ESGR Statement of Support (http://www.esgr.org/); COMPLETED NOVEMBER 2011!  Thanks to MaryJo Martyn and all 20 chapters!  Joe Smedinghoff plans to continue her work by first polling the chapters to see what initiatives are already in place and then building a plan for the entire state.
2.       Membership (SHRM CLA) Build SHRM Affiliate Chapters in the Southern part of the state (working on 3 already); we now have 4 in the works.  Research was completed in 2011 and letters to SHRM members in East Metro, Carbondale, and Mt. Vernon have gone out this week to see if anyone has interest in developing a chapter in those areas.  An additional chapter interest meeting is planned for early February in Matteson, IL.
3.       Government Affairs (SHRM CLA) Increase awareness of ISC-SHRM & SHRM resources among all state legislators (with SHRMs help as one of the 10 states they worked with last year); this is truly more like a five year goal.  We did have at least three chapters invite SHRM to do the Advocacy Program and we are nearing 300 advocates statewide.  We still need a state Advocacy Captain.  I’d also like to see 100% of chapters invite David Lust to their chapter to present the program.  We had our first statehouse visit last April and plan our second March 27th.  We added a state legislative affairs director to the board on a temporary basis to develop our outreach process and to work directly with the lobbyist firm we hired to watch for HR related bills that we can reach out to legislators about to increase awareness about SHRM members and their needs.  So far this month they found four bills (two of which were shell bills) that had an impact on the HR profession.  Reach 100 attendees at our Annual IL State HR Legislative Conference & Advocacy Day; we did not achieve this goal in 2011 but it is still a goal for 2012.  Watch for registration soon!  I hope to increase the state house attendance by at least 5% over last year’s first every advocacy portion of our legislative event.
4.       Reach 1000 attendees at our annual conference (in Aug at Drury Lane in Oakbrook); this goal was a bit out there since we really don’t have a chance at that number until 2014 (after SHRM national is in Chicago in 2013).  The reason is our current venue can only hold 972 in the auditorium where all the keynotes present.  In 2011 we had 923 totals in the building (which included attendees, speakers, exhibitors, and media).  This year we do plan to sell out early because John Jorgenson is a bang up conference director!  So plan to get your tickets in advance. 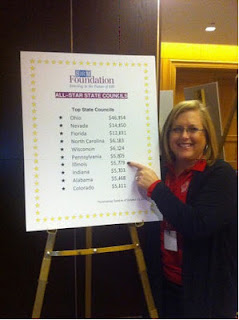 5.       100% Chapter participation in the annual Chapter Basket Raffle Fundraiser at State Conference; we were close in 2011 so this is still a goal for 2012.  We did increase our council giving by matching what was raised at this event and plan to continue.
6.       Develop a formal Succession Plan with the assistance of a Nomination Committee to be appointed; the nomination committee was appointed so the real work will be done in 2012.
7.       Finalize and implement a formal strategic plan started at last year’s Leadership Core Planning meeting; still in process.
8.       Finalize and implement an updated Website; completed in March 2011 – additional improvements are planned for 2012;
9.       Analyze our financial situation and develop a backup plan to sustain our council and support our mission for a year or two in case our income is impacted (primarily our attendance at annual conference).  We did appoint a financial committee and added same as an official standing committee per our bylaws draft yet to be approved by the board.  Both committees will complete goals started in 2011 this year. and
10.   We are still looking at additional ways to improve the overall operations of the council as we have grown significantly in a short time frame.  Council management professionals are being sought to help improve the overall operations of the entire.

Finally, again this year, I just want to say thank you to all those I have met and worked with along the way and to those I will continue to work with on the board and in the chapters. I am humbled to serve you the rest of this year and want you to know that my virtual door is always open. Call or text me at 217-414-1297, email me at donna@rogershr.com, DM me on twitter @DonnaRogersHR or Skype me at DonnaRogersSPHR.

Last but not least I want to shout out to the world famous Dave Ryan for putting up with me, posting this post so late, and for writing most but posting all 87 blog posts last year.  Wow!!!

Email ThisBlogThis!Share to TwitterShare to FacebookShare to Pinterest
Labels: Donna Rogers, Goals, ILSHRM, ILSHRM12
Newer Posts Older Posts Home
Subscribe to: Posts (Atom)
Click on the link for the
Illinois SHRM Web Site
Click below for a listing of
All Illinois SHRM Chapters