A Big Thanks to the 2010 Illinois SHRM Social Media Crew 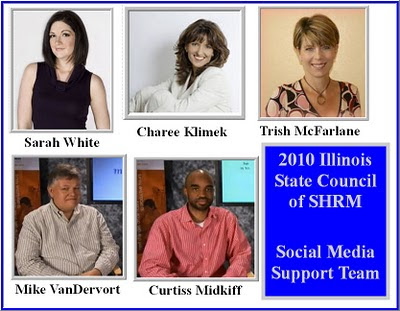 Last week was my week in the big leagues. As the social media guy for the Illinois State Council, I found myself in the middle of our annual conference and our state council's social media efforts. Long story short, the event found me hanging out with, talking with and socializing with our blogging crew and SHRM’s social media guy. Prior to this conference, I had met Mike VanDervort, Trish McFarlane, Charee Klimek and Curtis Midkiff at previous events although I had not had the pleasure of meeting Sarah White.

To anyone who has met any of these folks, you all know this, but I feel compelled to tell the world that they are all genuinely nice people who have no airs about them. Although the reality is they all have large followings on their blog sites and with their twitter followers as well. They were all very welcoming and spoke to anyone who engaged them in conversation.

In one instance, I read a blog post response where a conference attendee was uncomfortable walking up to Mike, although she had seen him at the conference. Mike did follow up with her in a blog comments section and offered up a phone call. In another instance, another commenter thanked Sarah for spending one-on-one time with her after a session answering questions about social media. Trish enticed all of the women on the board of the ISC SHRM when she asked for guest posts for one of Trish's many projects The Women of HR blog.

To some degree, each of them possesses a talent often seen in our children. Their multi-tasking was amazing - tweeting, blogging, questioning, talking - all at the same time! They all did it; this was intriguing to watch.

During the second day luncheon, sponsored awards were handed out. Without any prompting or requests, the blog squad in unison began tweeting out thanks to the award sponsors (Blue Cross) and quickly received a tweet back from Blue Cross. That’s what they do, and boy do they do it well!

So, in summary, and, on behalf of the entire the SHRM State Council, I would like to send out a big thank you to our 2010 blogger crew and SHRM national’s Curtis Midkiff for all of their work in helping us deliver this year’s conference to the whole world via the internet. It was truly my pleasure getting to work with and know each of you.

Stay tuned and see what Trish, Curtiss and Mike bring us from HR Florida, no doubt it will be interesting!
Posted by Illinois State Council of SHRM at 6:36 AM 3 comments: